Hyperthyroidism is when the thyroid glands produce excessive amounts of the hormone thyroxine.

There is an increase of cells in the thyroid gland which form nodules on the lobes and cause the gland to produce and release excessive amount of thyroxine into the bloodstream causing a metabolic increase, this increase affects most organs of the body.

It is mostly common in cats 10 years and older, with only 5% developing this before the age of 8, there does not seem to be a breed or sexual preference.  It is very rarely seen in dogs.

What happens to the body?

Hyperthyroidism is when there is an increase in the number of cells within the thyroid gland, these are benign growths and group together to form nodules on the lobes of the gland.  Several nodules can form on each lobe, with both lobes being affected in up to 70% of cases.

These tumours on the thyroid gland result in the increased amount of the hormone thyroxine (T4) and triiodothyronine (T3) being produced and released into the bloodstream.

When there is too much thyroxine released, it affects all systems of the body by increasing the metabolic rate.  This causes all tissues in the body to work harder and burn vital resources such as glucose, fats and protein.  Muscle protein is broken down to be used as fuel, with this increase of metabolic rate the body’s vitamin stores are depleted, leading to vitamin deficiencies.

With the increase in metabolism cardiovascular and respiratory function are affected, a faster metabolism means oxygen is used at a faster rate, this increases lung functions and therefore blood flowing to the heart, putting more pressure on the cardiovascular system.

It increases digestive function, the motility and also secretions, this cases diarrhoea, the increased metabolism increases hunger but because of the body burning things up so fast the animal loses weight.  With the increase hormone release the muscles are stimulated to react more vigorously, this is evident in the muscles tremors seen.

What are the signs?

Our Tagiwig range has the remedy Hyper T which is homeopathic and been designed to support your cats immune response to hyperthyroidism.  Hyper T includes remedies that will assist the body to reduce thyroid production, support metabolic function, increase weight and help with the nervous system, making it a great help with this debilitating disease. 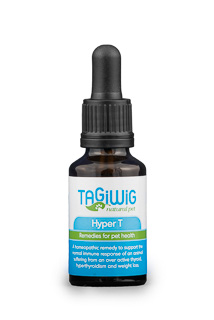