BJ my Clydie X came to live with us about 7 or 8 years ago. He arrived with some acknowledged “people baggage”. In spite of this he is a sincere and honest chap, who definitely felt more secure with some paddock between himself and people.

Though he could not be described at all as a flighty or nervous chap, he did have a heightened sensitivity to touch as his skin would twitch when you touched him – whether lightly or firmly.

He carried his head high when you were on the ground around him and tended to stand very stiffly.

My Clydie’s distrust of people had made him less than inclined to rush up to be caught, though over the years regular feeding has improved this.

After adding to his daily feed the Eponacare Flighty remedy by Natural Pet, within about a two to three week period, the body stiffness and skin flinching has all but disappeared. After about a month he is holding himself in a more relaxed manner.

After some consultations with Paulette at Natural Pet, I began to dose his water as well as his daily feed. Since I began dosing his water, he has started to meet me at the gate and has even on several occasions cantered up the paddock towards me.

His body language is now so much softer. He sometimes still takes a few steps away, but the other day he nickered out to me.

Thank you Natural Pet. You have changed his world! 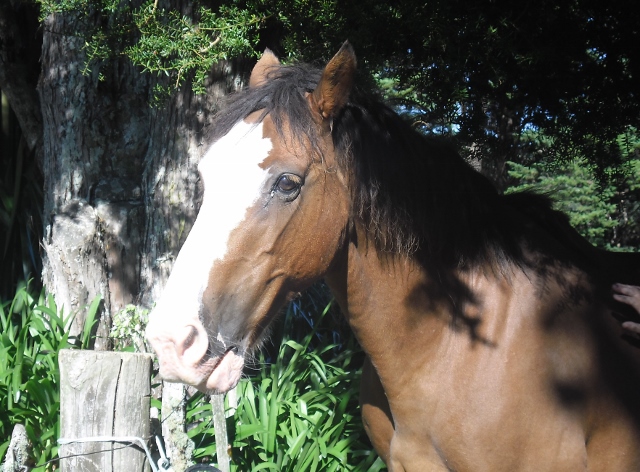